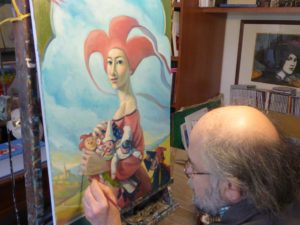 Artist’s Statement:
Claudio Giulianelli was born in Rome on September 23rd, 1956.
He attended a college of chemical sciences. During his studies he felt a growing interest in the arts. His passion grew stronger and that led him to study art history in depth and various painting techniques. He focused his research on classical art guided by a thorough observation of the Old
Masters’ paintings.
Books about Caravaggio and Flemish painters became his constant companions.
Claudio sharpened his style after meeting with well-known painters such as Delfo Previtali and Guido Razzi.
Through the years he travelled around Europe to see the Old Masters’ works up close.

The emotions he felt in the presence of these masterpieces inspired his future works.
In 1992 he moved to Corchiano, a very small town of etruscan origin located near Rome, where he currently lives and works.

About the Artist:
Claudio Giulianelli’s art is full of fantasy, creativity and deep analysis.
A kind of art that goes back to the past to discover true beauty, purity and authenticity of the imagery.
Claudio’s pictures, most of them representing feminine subjects, are a commixture of reality and imagination, dream and mystic, memories and symbolism.
The inspiration to the antique represents for this artist the opportunity to free his mind and create images that cast themselves to a new time of revolution in graphics.
This is a very difficult form of art maintained between tracks of real memories and freedom of expression. There’s a flash of light coming from the looks of Claudio’s pictures; it’s a light that doesn’t seem to belong to a particular time, neither in the past nor in the present. It’s the light of Claudio’s soul, the light of true expression of art going beyond any established dimension.
In terms of quality his works are spectacular; in terms of meaning his works are deep and remarkable. Claudio Giulianelli, like others despises the world around him; a world where hypocrisy, chaos and confusion seems to predominate over good. Therefore he finds home in his own universe, a place where he experiences mystery and fascination.
Claudio’s works have a particularly beautiful appearance and at the same time, they carry the capability of catching the observer’s interest and curiosity.
Viewing and pondering his works brings up a question about the subjects in his paintings, it seems impossible to determine their gender. This artist doesn’t distinguish male and female in his portraits because he sees both of them just as manifestations of human nature. In Claudio’s symbolism, where every character has a spiritual value, the differences lose their meaning and leave space for a new enchanting expression capable of engaging the observer. His body of work embraces many different cultural movements. It’s easy to identify elements of Surrealism, Impressionism and Symbolism. A very distinctive form of art based on instinct in which the imagery is lacking only the ability to converse. If those paintings could talk, they would certainly have something to say about the contemporary human behaviour. They would suggest a sweet and quiet period of hybernation, opposing reality in order to discover peace and serenity.
The message that this artist seems to convey is one of regaining the true dimension of the existence through history and ourselves.
C. Zonno.

Those who are already familiar with Giulianelli’s emotional soul could not help rejoicing at his new works…
The observer will surely be caught and brought into a surreal universe that would intensely fascinate him.
Claudio Giulianelli, whose body of work takes inspiration from Bosch’s philosophical chemistry of symbols between the human figures, effects his own artistic style in a fantasy world but still truly connected to his ontological reality.
A. de Angelis